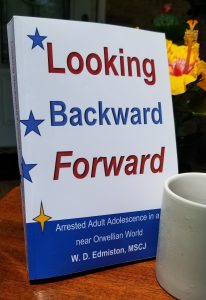 Would you believe the ideas that so many people have about how government should work come from a romance novel? In fact, the romance novel offers no policy, guide, or process to pull off the utopian solution? No less than John Dewy, the father of American education, according to the some, was a true believer, a kool-aid drinker, a dupe of forces he did not understand.

This is my most recent non-fiction book. It is a discussion of the concept of Arrested Adult Adolescence or the Tri-A. The Tri-A is a concept that says too many people living in our culture act like adolescent children. It is a society that grows more centralized and driven by politically correct philosophies daily. You will learn how a union forces those ideas onto schools. Political correctness affects our school system as does as party politics. The Tri-A discussed in this detailed book is created by our own school process. Those processes are out of step with the mind of the founders of our country and the classic American Way of life.  A revised version of this book will be ready in 2020. It will be a shorter, easier to read, synopsis of the topic, written like a police officer’s explanation of how a crime occurred. WDE

Although I was told many times in my law enforcement career that I should write a book about some of the things that happened, I never expected to write. But in 2006 my son took his life as a direct result of the internet. Using investigative skills and the research ability I learned from getting my Master’s Degree from Texas State University I found huge problems with adolescent exposure to internet excess. I wrote about them as a warning to other parents. By 2016, ten years later, everything I warned would happen was being discussed on the news outlets as if they had just been discovered. The book is dated now, but the dangers still exist. The Saga of Rick Rokr still offers a look at how simple things become dangerous stumbling blocks. It is a short story at the end of the book of how my son entered an alternate reality that led to his death.

You can buy  Why Parents Should Fear Myspace here