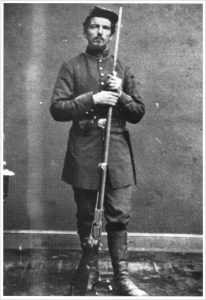 This Virginia grab at guns seems to have made an impression on the left. Don’t let that fool you. It reminds me of the Civil War battles at Gettysburg at Big Round Top and Little Round top. A superior force of Genral Lee’s troops led by Sgt. William Oates attacked a New York 15th Regiment and a detachment of Berdan’s Sharpshooters under the command of 1st. Sgt. Wyman White.  At Big Round top Oates troops charged several times and were pushed back. Significant to this story is that when they regrouped, they were told to attack the rear flank of the Union troops. They were ordered ahead before the men could refill ammuniton pouches or even their canteens. They were battle hardened troops with a lot of experience. Oates wanted to stay at Big Round top and establish a defensive position. But a too-confident superior ordered them after the Union Troops. The marched with older muskets and flintlocks and a few captured Springfield’s which were slow to reload.

At the next position, Little Round Top, White’s men had retreated and taken up even better positions. It was a carnage of unbelievable proportions. The battle of Gettysburg was decided right there when the Southern troops were in full retreat. The New York citizen regiment’s under Sgt. White’s command – all of them Sharpshooters were carrying newer percussion cap rifled muskets which reloaded much easier. The men too were chosen because they passed the test of ten succesive shots into a bullseye at 600 yards in a five inch pattern; not a hair more would pass. Once they passed that test, these citizen soldiers were sent to the front lines. The far smaller group, so armed, untested and little training beat back and almost destroyed the entired CSA regiment commanded by Oates’ superior force.

It was still true in Fallujah years later, expecting the citizen soldiers there to be a fairly easy fight the US military leaders almost got our asses kicked. Our guys found dozens of training, gun handling and tactical classrooms. The citizen soldier was tough, prepared and ready to defend their position.

The moral to the story? There is no reason for us to think all we need are hunting firearms.  The defense of our Second Amendment rights, or more precisely, the government’s restriction on doing a damn thing about them must be preserved. We cannot assume as did Sgt. Oates superiors, that we have them on the run and they will not keep running. These guys think they have a better postition and will make another stand. We, as citizens, can’t have our figurative weapons unequal, with empty canteens and be low on ammunition. In fact, our superior weapons of, truth, educating ourselves in the law, and acting as a government of the people must be backed up by another charge.  Soon. The government of Virginia need to know it’s not just a matter of mounting another charge.

The fact is, 1st. Sgt Wyman White did exactly that, when the Southern forces attempted another assault on Little Round Top. He ordered his men to charge down the hill.  Had Sgt. Oates of the CSA won at Little Round top, the Civil War would have been won by the South. We would be two nations. One with slavery as a functional part of their national identity. Yes, we need as good and as powerful weapons as those that will be brought against us. And we as a civilian militia should train ourselves to shoot, to argue with our government and make sure the people we send to Congress go there with the same attitude. And, no, that does not mean I would hope that the south would have won – not implied or suggested.  Slavery should never have happened in the first place.

The first amendment is protected by the second. When one goes away so goes the next. The government of Virgina was seeking to put the force of the United States Military and their weapons against their citizens. That is staggering and the founders took the power of the government away in order to make sure it never happened.

Sgt. Oates went home to Alabama and eventually became Governor of the State. 1st. Sgt Wyman White went home and became postmaster of his community. Years later, Oates wrote to White commending his courage, professionalism and said there should be a statue erected at Gettysburg to him. WDE

OGSB Authors Associate, Spence Allen has a new murder mystery due out this month. Sign up on our Contact Page and we will let you know when you can get a free eBook copy. ogsbauthors.com

A couple of years ago, Looking Backward, Forward was published. I wrote the book and placed it on Amazon to copyright so to speak a concept.  It wasn’t ready. At the time, having a Website and Blog had not entered my radar; I had no idea what it could be.  This is the first in a blog series that is what that book should have been in the first place.

Some 40 percent of our culture contains adults who are locked into thinking characteristically like an adolescent child, a term coined as Adult Arrested Adolescent or Tri-A.  It is derived from my reading of Eric Hoffer’s book, The True Believer, thoughts on the nature of mass movements, (1951.) Hoffer was the first to give us definitions and an understanding of how mass movements work. Central to his concepts is the idea of the true believer. True believers see themselves as damaged. They instinctively look for a way to fix themselves by becoming part of something bigger and not always better. Being famous for crazy stuff is good enough. Ideas like Progressivism, Socialism, Catholicism, Christianity as a religion, Protestantism, and Islam also contain a large number of fanatics. Social Reformers like Barack Obama seek out these who mistakenly or foolishly see themselves as nonredeemable. They offer them glory by “hitching themselves” to their movements. To accomplish that ruse, Obama bastardized an idea of Ralph Waldo Emerson’s whose suggestion was for the individual to personally set high goals, “hitched to stars” rather than subsume themselves to lower expectations. To be fair, warrior chiefs, generals, and all other forms of totalitarians seeking cannon fodder have used the same spiel throughout history. From those ideas I began to look at them as seeds of a latter-day behavioral disorder I previously called Tri-A or Adult Arrested Adolescence.  Hoffer didn’t say a word about the Tri-A himself, my research following his line of thinking lead me to the Adult Arrested Adolescent.

Utopian schemers have created the Tri-A to be the ideal follower to their causes.

Then as now, Hoffer showed us that Utopians are constantly trying to make their fiddling a needed control mechanism of mainstream American culture. If then the Tri-A concept takes that one step further, and they do line up very well, I contend it was not an accident. By manipulating the American school systems quietly and promoting politically correctness culturally Utopian schemers have created the Tri-A to be the ideal follower to their causes. On this topic I will be discussing the entire issue as if preparing a probable cause statement by an investigator. Developing the idea of cause is part of my background and training. Perhaps one day a psychological tool can be created to determine by a set of established standards if the Tri-A as a legitimate addition for the Desk Reference to Diagnostic Criteria. It may become a diagnosis like Obsessive Compulsive Disorder or Depression.

After WWII and the revelations of what fanaticism had done to millions in the world, Hoffer could study the direct cause and effect of manipulative governments and populist leaders.  Hoffer watched these activities as they occurred during the 1930’s through the 1950’s.  He then compared them in The True Believer to ideas that are more ancient and the words of commentators who spoke on similar eternal truths of those periods.  What he taught us has passed the test of time.  Hoffer understood mass movements because he immersed himself in the topic. Since 2006 I have spent hundreds of hours studying the Tri-A.   For the last three decades since first reading his book, I have applied his ideas to what has happened in America.  Since the lure of Utopian ideas and political movements are highly attractive to the person who feels he is damaged and incomplete they are interested in changing things.  Change — without any further definition has become a war cry for Progressive partisans trying to recruit those who seek to reinvent themselves. The same partisan evangelists promise that change will make the damaged person whole but offer only fairness, equality, and promises of creating new legislation.  Each evangelist hopes that their one great effort will guarantee equality and fairness.  They tell every listener the solution is to promote the concept of centralization of all matters to the highest authority.  The first problem with all their solutions is that fairness and equality are concepts that work between individuals.  A third party, unless it is a judge deciding a fact of law, is a poor choice to determine fairness for others. So is a judge, but that’s how we set it up in the legal system. Fair solutions cannot be enforced by a top-down structure that comes from an overeager government.  As far as centralization and dictation from government on the outcome of things is concerned – why do we think people in government know better?  The kids of my heyday would have said, “Who died and made you king?”  Secondly, teaching that there is an ultimate authority to which all disputes can be referred does not teach self-reliance and the ability to negotiate with your friends and neighbors.  In early civilizations, the elders of more organized societies met at the city gate to act as judges in disputes.  It is an ancient method.  But involving the police or courts in your affairs speaks of weakness of character and that you cannot reach a constructive agreement.  At that point, the only thing left is to recover damages from whatever the elements of the dispute show are called for. Letting others decide how to live your life is like shooting nuclear warheads.   A real rocket scientist who worked in the intercontinental missile program told me, “No matter what happens, if we use these things; we lose.”  To teach children that they cannot get through life without handouts or help from the “boss” is to teach them to be peasants.  We lose. Have you not asked yourself if there is something more serious going on when grown people have no understanding of things taught in high school.  They cannot understand or construct simple sentences or grasp more complex issues like cause and effect?   Were you slightly amused at the number of people who went to psychiatrists because their candidate lost the election in 2016?  Do the people who serve you, work for you, sit next to you at a ball game sometimes amaze you with their childish view of things?  Do you wonder how they arrive at concepts like, “Drug free zones” or “Safe Spaces” since those are hopelessly childish views of how social control works?  That is the point.  They are not just acting like kids; they really are still adolescents behaviorally. They let others tell them how to live and so nor understand why it does not always work out in their favor, interpreting fair and equal as “The way I want it to be.”

In later posts I will continue to layer evidence that will point to the validity of the Tri-A or Adult Arrested Adolescent. Follow us and leave your email so we may keep you updated. WDE